There are numerous card games that people like to indulge in during their leisure time. However, poker is one of the few ones for which enthusiasts especially take time out of their schedules.

According to Britannica, poker is one of the most famous card games globally that features different types and forms. The main objective of the poker players playing the popular game is to call the bet, raise it or concede, depending on the opponent’s move.

The game is extremely popular in the North American region, which is believed to be the birthplace of the addictive card game. Even though there are numerous types of poker games, they all share many similar features.

The popularity of poker is not limited to the orthodox offline format. Enthusiasts of the card game prefer indulging in different types of the online version of the poker game since it is conveniently accessible from anywhere. Players can play online poker from anywhere if they have a smartphone or PC and a stable internet connection. In addition, there are numerous other benefits of playing online poker.

For instance, players can match up against other skilled individuals from different parts of the globe to test their skills and improve at the game. Moreover, there are numerous formats of the card game available, and thus, players get more options to choose from.

According to some historians, poker has been around for more than ten centuries. Yet, there are numerous facts about the famous card game that people still have no clue about. 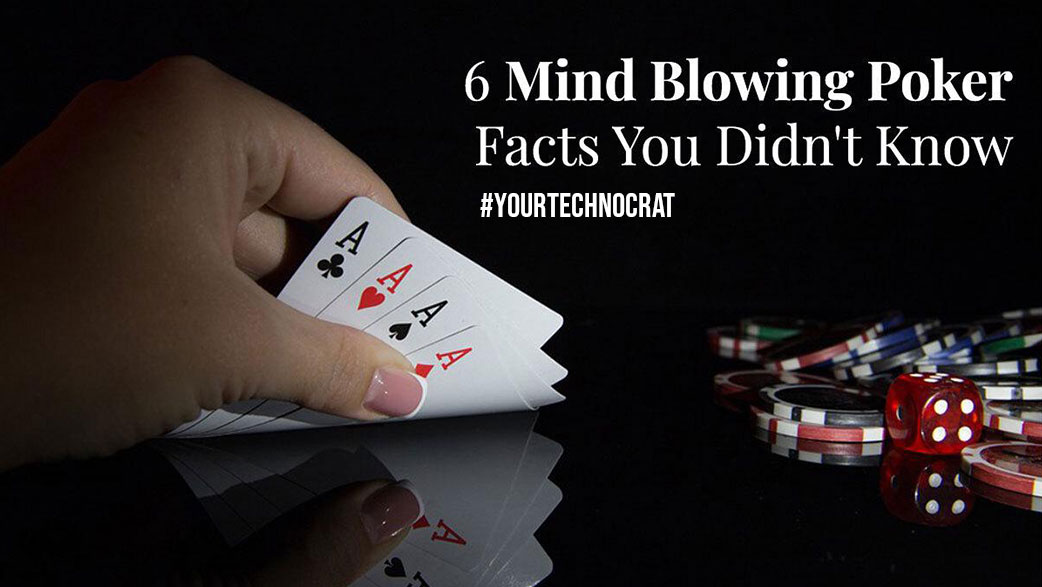 Here are some of the mind-blowing poker facts that most players and fans have no idea about:

Poker Was Initially Played With 20 Cards, Not 52.

When players worldwide started playing poker, the rules and concepts were quite different from the game’s current rules. Players played the game with a deck containing only 20 cards back then.

From 1984, the rule regarding the number of cards changed, i.e., a deck containing 52 cards became standardized. Moreover, only four players could play a standard game of poker. Each player received five cards from the dealer, and whoever received the best set of cards would start the game.

Also Read: The 9 Best Money-Making Apps for iPhone and Android

Poker is one of the Most Profitable Forms of Sports.

Even though there are few successful poker players, a top-tier poker player can conveniently make more than $50 million every year. This is more money than what major players of other sports earn annually.

Furthermore, expert poker players can add to the figure by gaining sponsorships and other forms of brand-based endorsements. Hence, poker as a sports format is counted as one of the most profitable ones.

There are Multiple Theories About the Card Game’s Origin.

Historians have different theories about the origin of poker. The majority of the historians state that the popular card game originated in a specific area of Louisiana, which is a famous state situated in the United States of America. On the other hand, numerous historians think that poker was invented by a Chinese Emperor who ruled during the 10th century.

Furthermore, some historians state that the card game is a progeny of a Persian game called “As Nas”. Even though it is not possible to trace the authentic origin of the game, the most believed theory is that poker is a successor of Poque, a French card game, and Pochen, its German counterpart.

Both Poch and Pochen share a resemblance with Primero, a Spanish-origin game that was very popular in the country during the 16th century. Many believe that when the French colonists came to North America, they popularized the game in the region, including New Orleans and its surrounding areas.

The First-Ever Poker Tournament Was Televised in 1973

Even though poker was a well-known game, poker games or other related events were not broadcasted or televised during the 1900s. The game was played as a hobby rather than a sport.

In 1973, the first-ever tournament was televised for the common public. After the famous event, the popularity of the card game as a sport significantly increased, and soon numerous tournaments began to be broadcasted for keen fans of the game.

Back when online poker was not available for enthusiasts, most players enjoyed the game in offline mode. Poker games often last more than anticipated since players do everything to emerge triumphantly. A game played at the Byrd Theater in Arizona in 1881 continued for more than 8 years and five months.

The game’s buy-in value was set at a whopping amount of $1000, and the players involved were well-known personalities. The particular poker game shattered all the previous records and became the longest poker game in the history of the card game. Even today, no poker game has been able to move ahead and surpass the historical match’s duration record.

Also Read: Why Use a Crypto Exchange and How to Make Money with Its Help

The Highest Prize Pool of a Poker Tournament Was $82.5 Million

Every year, there are tons of poker matches and tournaments that are held all around the world. Most of the top-tier poker tournaments have massive prize pools for winners.

The 2006 World Series of Poker event featured the highest prize pool ever for a poker tournament, i.e., the massive amount was approximately $82,512,163. The winner of the prestigious poker tournament was Jamie Gold. The talented player walked away with a whopping amount of $12 million.

Poker’s popularity is significantly increasing. One of the primary reasons for the upward trend in the popularity graph of poker is the numerous types of online poker games that enthusiasts from all around the globe love to invest their time in.